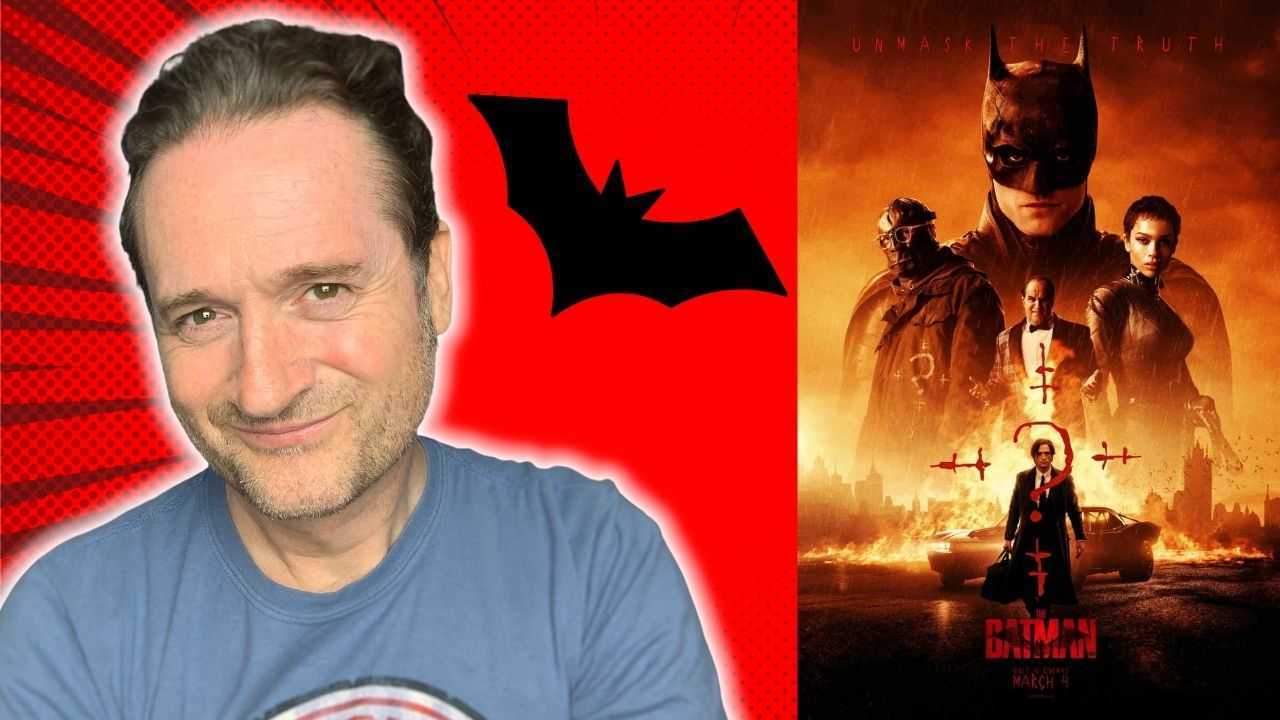 Make a sandwich, settle in, this is a bit of a read…

Batman, for me, was forged in the crucible of the dark stories created by incredible modern ‘Comic’ book writers such as Alan Moore, Grant Morrison, Dennis O’Neil and Alan Grant and Doug Moench.
The original creators Bob Kane and Bill Finger, may have birthed this most potent of characters, but I side stepped the early stuff (apart from loving the wonderfully kitsch Adam West/Burt Ward TV series as a kid – who didn’t?) instead, I grew up reading the ever darkening, haunted tales of a vengeance seeking billionaire who’s traumatic childhood led into the shadows of psychosis and mania.

To be a Batman fan, meant a journey of pain and vulnerability. What always intrigued me and kept me coming back for more, was the fact that he was in so many ways, the same as most of the damaged, twisted bad guys he traded blows with – he walked the same line, only on the other side – an intriguing proposition and one that singled him out so uniquely in the world of ’superhero’ novel writing – he isn’t a superhero at all in fact – more a fearless, super-detective with a tendency towards violent street brawling and a penchant for hi-tech gadgets – superhero? Nah, just super-cool.

The films over the years, and probably more precisely, the interpretation of the character in the films, has been hit and miss in my opinion. Michael Keaton and Tom Burton embraced the neon, primary colours and succeeded in lending an Uber cool status that also explored the darker elements – it was the 80’s after all so kitsch was front and centre still. The following movies were then an abject lesson in how to decrease the value and undermine the soul of the whole endeavour until there was little left to do by smirk sadly as the woeful final effort by Joel Schumacher’s Batman and Robin.

The Chris Nolan/Christian Bale movies were a huge sigh of relief, at last here was a film maker that understood, that grasped the correct approach and delivered three fine films that developed the notion that Batman could and should be taken seriously, that Gotham was just a step always from any city in the modern world and that it was possible to consider the actual possibility that maybe, just maybe, someone like him might exist. The second film in the trilogy – The Dark Knight – is largely and correctly in my opinion, considered a masterpiece.

Perhaps rather controversially, I don’t personally think that Nolan got it all right – the first movie ‘Batman begins’, although breathtaking in its scope, lacked a bit of soul, and the third movie ‘The Dark knight Rises’ stretched its own credibility rather thinly for me (it’s not a ‘repeat viewing’ movie for me at all). However, my personal views aside, it cannot be denied what an incredible trilogy it was and changed the game when it comes to the adult orientated action comic book movie genre.

The less said about the recent films by Zack Snyder the better IMO – my apologies but Ben Affleck simply doesn’t cut it, and the movies are confused and almost impossible to watch due to overbearing CGI reliance.

So, here we are, 2022 and a new take on the mythology, yet another attempt to recreate and re-examine this beloved icon…

When I first heard that there was to be another version, the first thing I thought was ‘why?’ – what’s the point? Recent attempts hadn’t proven to be very successful and how on earth could anyone top the Nolan trilogy? But then I heard about the casting and the announcement that Robert Pattison was to put on the cowl and I was immediately interested. You see, contrary to popular opinion amongst the naysayers, I have always thought he was a fine actor, in fact I’d say, a powerhouse possessed of extraordinary talent. He may have become a teenage icon via the ‘Twilight’ series – certainly not made for me – but it can’t be denied he cut his brooding, haunted teeth in those incredibly successful films. I have watched him develop as a superb character actor in ‘The Lighthouse’, ‘Good Time’ and ‘Cosmopolis’ where he inhabits the characters he portrays with such fearless commitment as to rival the very best. It is because of this that I was hopeful.

So, does he pull it off? Yes, yes and thrice yes! My friends, I will go so far as to say this: forget all you know about Batman, put aside you’re worries and blatant prejudices – this is THE depiction of the character. THE rendering of the icon and THE one I have been waiting for. Robert Pattison’s performance is utterly staggering, drips class and will stun your eyes. This Batman isn’t just haunted, he is deeply wounded, crazed even, it’s a performance that simultaneously examines the complexities of a broken soul whilst presenting a super intellect driven by vengeance and the need for answers. He is so completely believable that it’s hard to grasp, and at times hard to watch. Is he physically up to the job? Well, he is a wiry, cunning, brutally crazed violent Batman; unhinged, unafraid and deeply scarred – both inside and out. He may not have the muscularity of Christian Bale, but he more than makes up for it with his sinewy, almost wasted body that he has little regard for in the pursuit of justice and vengeance – he is strung out on the drugs of pain and shame.

The supporting cast are equally committed to the task and bring a tour de force of complementary performances that only increase the depth and courage of the story. There are many standouts – Zoe Kravitz is as sassy as she is kooky, brutal as she is broken, as well as lending a thoroughly modern take on the character of Catwoman. I must at this point praise the writers who have carefully and correctly laced the story with the zeitgeist, where threads about race, sexuality and the ballooning issues of the Internet are presented but not show-horned in. Here is a universe just like our own, here are recognisable conversations that focus on real problems.
However, If I was pushed, I would offer that the stand out performance of the film is by an unrecognisable Colin Farrell as the Penguin. This is his finest performance, a career best, and one that re-invents the character in a way that keeps the fun but injects a syringe of pure ruthlessness and cunning to put him up there with ANY historical bad guy. Stunning. Jeffrey Wright as Commissioner Gordon is also wonderful and perfectly suited to the role, a role that adds to his ever growing collection of calm, yet resourcefully wise characters.

Not everyone works perfectly – Paul Dano as the Riddler, is sometimes on the wrong side of the line when it comes to ‘shouty’ deranged characterisation, with his performance irritating at point rather than engaging. Sadly, for me, Andy Serkis feels oddly miscast as Alfred despite a well measured approach. That’s one character that lacks the bravura of past attempts such as Michael Cain who frankly is hard to beat. Having said this, they aren’t ‘bad’, both actors are clearly invested in the roles and don’t take anything away from the overall quality of this well chosen ensemble.

The films thankfully side-steps the origin story of Batman, instead opting for a much more interesting examination of what his parents were and how their wealth and position influenced their decision making. It is in many ways an essay on how wealth corrupts and at every level – how influence isn’t always hard fought for and won, more bought and sold. The evolution of the story becomes embroiled in a stark realisation for Batman and charts his reaction to the revelations contained within; a journey to enlightenment suffixed by historical trauma.
At the very heart of this story however, is a detective yarn. It comes on like Raymond Chandler, James Elroy or Derek Raymond, with it’s dark hearted crime pulse that draws upon the evil that men and women can do to each other without blinking. All the tropes are there, shot through with hidden clues, miss steps and pitch black hard bitten dialogue. This is perhaps my only real criticism – it is very wordy, and exposition is constant, so much so that at times I didn’t want the characters to tell me what was going on! But it’s a minor quibble really, such is the quality of the writing and film making -Just be prepared to really listen.

At this stage, I must bring in the director Matt Reeves – who has consistently made serious films out of fantastically demanding characters, stories and situations. The signs were there early on with his incredible major studio debut ‘Cloverfield’ and from there he created the ‘planet of the Apes’ trilogy and ‘let me in’.

The pacing, the drama, and the staging of this film is simply incredible. There are scenes that he has created with his team – cinematographer Grieg Fraser, editors William Hoy and Tyler Nelson as well as an army of special effects and production design people – that have pushed the envelope beyond anything rendered on screen before. One such moment is a car chase in the rain that quite simply left me breathless – and the CAR is bloody awesome as well as not becoming a tired distraction – this time around it’s far more ‘real’ a souped up muscle car that isn’t flash just brutal and functional – rather like it’s owner. Another is a fight in a corridor revealed only in the light created by muzzle flashes of machine guns, which is balletic and strangely poetic.

In summing up (and I know I’ve kept you a while) I’ll say with my hand on heart that it is my personal favourite Batman film and at long last reached places I’d always wanted to visit. The depth and quality of the filmmaking is a whole new level, the colour pallet is gorgeous, the music beautifully composed and is succinctly minimal – Reeves has also employed a Nirvana song to wonderful effect which fits so well as you could consider this Batman to be a Cobain level troubled soul, so it really adds.

Criticisms? Well, as said it is wordy, and occasionally I found some moments stretched the story’s credibility- but then I reminded myself I was watching a bloke in a bat-suit twatting another who resembled a Penguin! The final act does stray into convention a bit, but even when it does, it kicks the arse out of most with the stunning visuals so I can forgive. I do think the nearly 3 hour running time is a touch miscalculated – there are scenes that play too long and DO remove the drama a bit, the end especially could have been cut back and would have been better IMO – 20 mins less overall COULD have helped, but really it’s nit-picking as it’s hard ON THE WHOLE to criticise this film, it is intelligent, deeply committed film making for thinking people who want to be entertained as well as have their brain poked. I sincerely hope this breaks all records and affords the same team the luxury of making more.

Above all, I’d challenge ANYONE not to recognise the rising star power of Robert Pattison – he IS Batman and should, if there’s any justice, have the world at his feet after this stellar outing.
Incredible.