Toby and the Whole Truth – Ignorance Is Bliss (25th Anniversary) 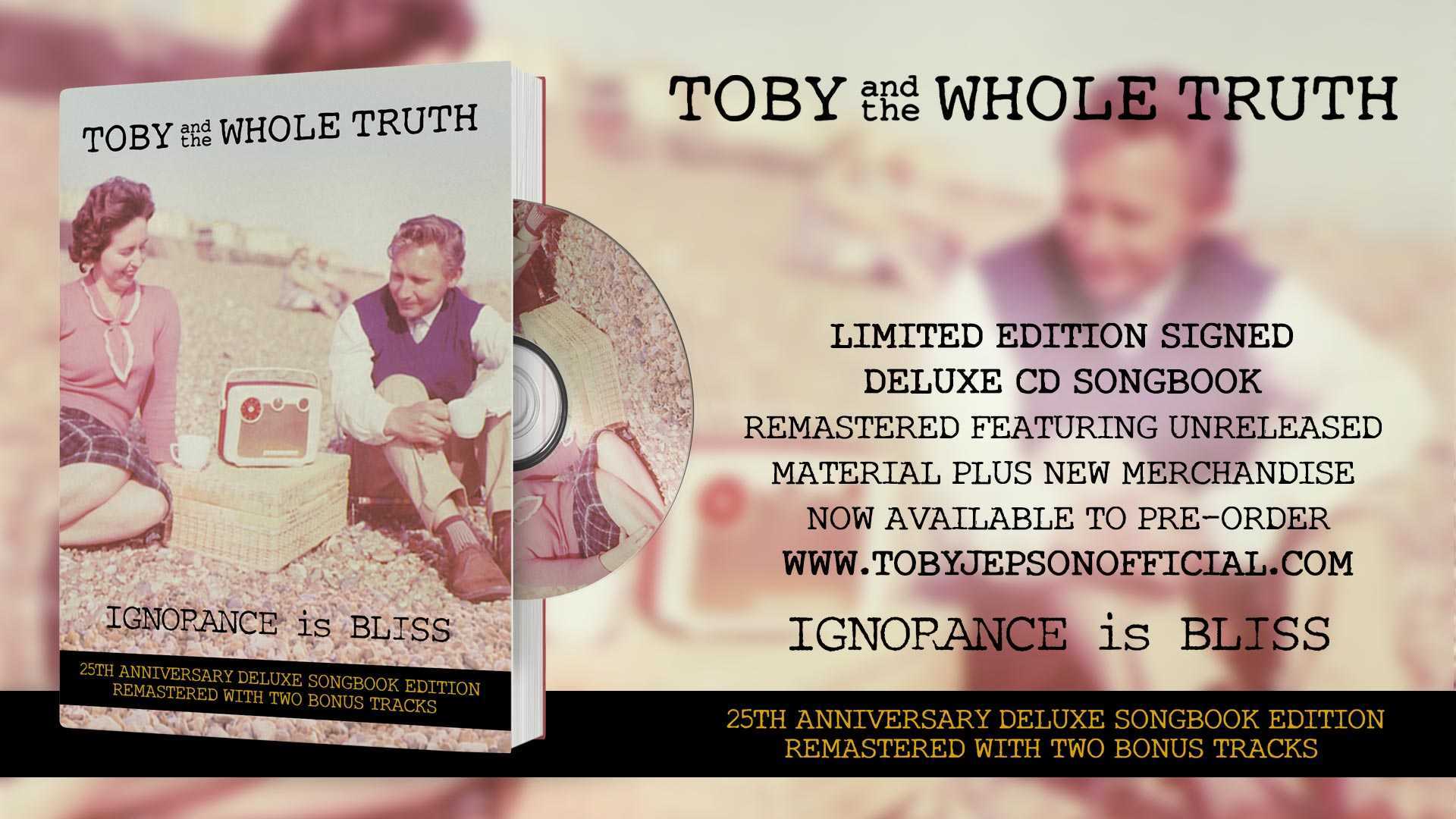 In 1995 Toby Jepson released his ﬁrst solo album through an obscure Indi label ‘cottage industry’ – a far cry from the heady days of Polydor records and the major record label scene. A year or so previously, Little Angels had bowed out at the Royal Albert Hall after 7 years together and becoming one of the most successful bands of their generation. But all was not well, internal friction, dwindling label support and a fast changing music scene took its toll on the band and once disbanded, gave Toby much to dwell upon.

Ignorance is bliss was the result.

The album contains 11 songs, each rich with dark complexity and longing as well as a full blooded guitar bass and drums application. This is still rock n roll, but on the borders of the alternative rock scene, coming on like a hurricane dipped in sherbet, it’s edge is tempered by a luscious melodic bent. Songs of betrayal rub shoulders with the achingly sad, the hopeful mixed and spread thick with existential angst driven by an obvious need to change and explore a different path. This couldn’t be further away from Little Angels if it tried. Recorded in his home studio situated in a tumbling down ‘oast house’ in the deepest most verdant Surrey countryside and at drummer Pete Thomas’s (Elvis Costello and the attractions) studio – the Bonaparte rooms – in Richmond London, it is home grown, experimental, lo-ﬁ and abrasive, beautiful, honest in the extreme and sonically cutting. Vocals swirl in vaguely discordant monologues that stab and cajole whilst guitars slice their way across the top of a rhythm section that at times feels like it was recorded in a New York Jazz club at the height of prohibition, imploring the loiterer to park his or her expectations at the muddy doorsteps at which it was made.

The album was completed by musicians Russ Godwin on guitar and bass player Roger Davis. Recorded on one Adat digital recording device, through a Neve mic pre amp, the approach was naive – Toby engineered the entire album himself despite never doing so before – yet, out need came invention. Friend and colleague, Bryan Adams, gave Toby the use of his Canadian home studio – the ‘warehouse’ situated in his private residence in West Vancouver BC – for free to mix the album which was completed in two weeks by British super producer and mix engineer Stephen Harris assisted by Mike Plotnikoff.

It was originally released to a chorus of, some what, bemused yet critically positive approval by the rock press, however, it sadly disappeared without much of a trace. A tour happened but also failed to create the buzz needed to keep the hope alive – largely due to a severe illness Toby contracted whilst touring. It’s fair to say, Toby has always felt the record was never given the opportunity it should have had. Fast forward to April 2020 and in the midst of the worlds biggest modern day pandemic, this little known gem is set to emerge again, on Toby’s own record label ‘Jepsongs recordings’, with a fresh coat of paint, including two previously unreleased bonus tracks – ‘Get your feet on the ground’ and ‘spiritually bankrupt’ as well as a full restoration remaster by Simon Francis. Released in a ‘song book’ format containing 36 pages of production notes, hand drawn illustrations (by Toby’ s youngest daughter Evelyn), lyrics, song explanations and a forward introduction by writer, journalist, long time friend and conﬁdent David Gailbraith (Kerrang) this release is set to reestablish this long lost opus as a curious bookend to the career of one of rocks most enduring, yet largely underground, artist. As a bookmark in time for Toby, this completes a 25 year journey that started with a scream of deﬁance and continues now with a gloriously deluxe belt and braces audio polish, set to provoke and stimulate music fans to take note of Toby the music artist; authentic. serious. fearless.

The pre-order will run for three months from April 10th 2020 until delivery date of 13th July 2020, and is available through www.tobyjepsonofﬁcial.com Single ‘I Won’t Be With You’ will spearhead the album campaign. There is an accompanying range of merchandise apparel also.